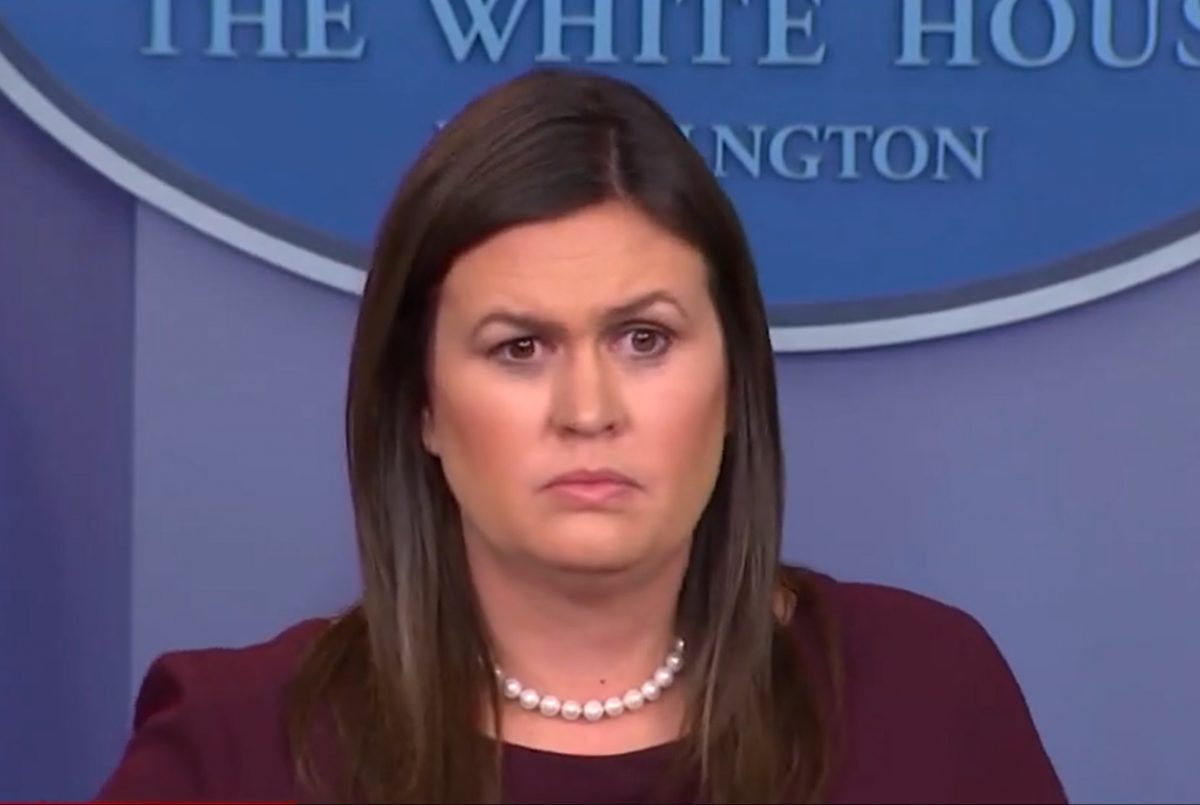 White House press briefings became something of a rarity in the Trump Administration over the last few months, but on Thursday, Sarah Huckabee Sanders returned to her podium and held an event in the James S. Brady Press Briefing Room.

The twist: the briefing was mostly off-record and Sanders only took questions from kids.

The White House is celebrating Take Your Sons and Daughters to Work Day today, so Sanders invited the children of staffers and journalists to join her for questions in the briefing room. The White House press secretary was also joined by Vice President Mike Pence for at least a portion of the gathering.

One of the first things that White House press reporters and political observers noted about this is that this was the first “briefing” Sanders has held in about a month and a half.

Vice President Mike Pence just popped into the briefing room to Surprise Sarah Sanders during her off the record briefing with children for Take Your Kids To Work Day. pic.twitter.com/gVhvRsomVF

.⁦@VP⁩ Pence joins ⁦@PressSec⁩ Sarah Sanders for a surprise visit during a briefing with children on take your kids to work day. Sanders has not held a regular briefing with White House reporters in the briefing room for more than 40 days. pic.twitter.com/Jgq5Qk8SPF

It’s been 43 days since @PressSec gave a WH Press Briefing begging the question – what is her actual job is she’s not briefing the press. Well, based on the #MuellerReport, it’s to lie to them and shovel propaganda … https://t.co/UIVzHpsFYX

Sarah Sanders is holding a “mock briefing” with kids today at the White House, part of “Take Our Sons and Daughters to Work Day.”

Reminder: Sanders has held just TWO formal briefings with White House reporters in all of 2019. It’s been 45 days since her last podium appearance https://t.co/W68sliDpQY

Latest in the weird White House /media relationship: Briefing room filling up for a briefing by ⁦@PressSec⁩ Sarah Sanders who almost never gives briefings. Only problem? It’s a fake briefing held off the record for children on ‘bring your kids to work day’. pic.twitter.com/4DcfkC0jGG

As for the briefing itself, some of the questions and answers have been picked up, plus Sanders allowed the grown-ups to report at least two pieces of legitimate news about the president.

A bunch of the questions were ‘favorite color’ and ‘favorite dinosaur,’ but Sanders was asked about child separation policy by one kid. She replied Trump wants to “keep families together” https://t.co/tfCNpQvz97

.@PressSec tells kids that Trump will be speaking at the Air Force Academy commencement next month

Child: What’s Trump do?
Sarah Huckabee Sanders: “He’s the president of the United States.”
One of her young sons: “So he can do whatever he wants.”

Children of White House reporters and staff are in an off-record briefing with press secretary Sarah Huckabee Sanders. pic.twitter.com/QZJ9ufQCax

“Sarah, when will you brief for the real reporters,” AP’s @dsupervilleap asked at the end of the kids WH briefing. No answer from the podium.

Sanders’ credibility has been under fire lately, ever since Robert Mueller‘s report revealed that she made up a fabrication when she told the media that the FBI was delighted when President Donald Trump fired James Comey.