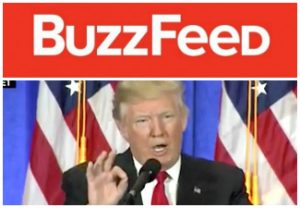 “We stand with [Editor-in-chief Ben Smith] on his decision to publish this newsworthy document, which was reported on by multiple news outlets and seen by high-level government officials including the president and president elect,” Peretti wrote in an email to Buzzfeed staff obtained by Business Insider’s Oliver Darcy.

“We are not going to respond to these divisive comments,” he says re: Trump criticism. pic.twitter.com/O3SO7Z3k8G

“We are not going to respond to [Trump’s] divisive comments, which put us in great company by the way. The New York Times, CNN, and The Washington Post have all been attacked,” he continued. All three outlets have also published pieces critical of Buzzfeed’s decision to publish the piece.

“So has Meryl Streep and the cast of Hamilton, but we’d never compare ourselves to people that talented ;),” he concluded. “We are going to keep doing what we do best, which is deliver impactful journalism.”