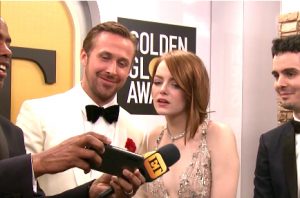 Last night, Ryan Gosling won the award for Best Actor in a Comedy or Musical, a category Ryan Reynolds was also nominated in. When Gosling walked to the stage to accept the award, Reynolds and Andrew Garfield decided to make out in a moment that was captured by cameras. The Internet couldn’t get enough.

Emma Stone, who took home the award for Best Actress in a Comedy or Musical obviously wasn’t watching the ceremony on TV, and hadn’t heard about the kiss between her ex and Reynolds until after the show. Entertainment Tonight caught up with her to ask her about it, and she was shocked. “What? They did not kiss each other. They did?” she asked, laughing.

It’s pretty much the best response you could have to watching your ex kiss someone else. Gosling chimed in saying, “I mean, I’m happy for them, honestly.”