Herman Cain In March: If Anyone Finds A Skeleton In My Closet ‘They Will Have Made It Up’ 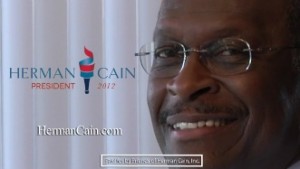 In day four of the Herman Cain alleged sexual harassment saga, a voracious media continues to gobble up every morsel of related information, and even as the embattled GOP frontrunner stokes the flames of this story, a look back on the candidate’s past statements shows what might have been some missed foreshadowing. The Daily Caller‘s Matt Lewis dug up a tape of a March, 2011 Cain conference call, in which he is asked about possible skeletons in his closet.

During the call, a Q&A with conservative bloggers, Cain is asked what, if anything, oppo researchers might turn up to discredit Cain.

He also took a veiled shot at President Obama, saying, “I have an original copy of my birth certificate…”

After ticking off a variety of things he hadn’t done, Cain said, “So, no, I don’t have any of those kinds of skeletons in my closet.”

Lewis’ headline is “Herman Cain in March: No skeletons in my closet,” but what do you expect any candidate to say to that question? “Besides my predilection for auto-erotic asphyxia and my unusually frequent nocturnal visits to pet cemeteries? Nope, nothing!”

What seems odd is Cain’s concluding sentence. “…what I have told people, if they come up with something to try to damage my reputation, they will have made it up.”

Maybe this is just the benefit of hindsight, but doesn’t that sound like something that should have set one of those conservative bloggers’ Spidey sense a-tingle, and made them go, “Wait, what? You go around telling people that if someone says you did something bad, they’re making it up?”

Here’s the audio of that portion of the call, from The Daily Caller: