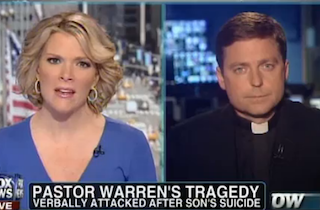 Over the weekend, the Saddleback Valley Community Church announced the sad news that Pastor Rick Warren‘s youngest son, Matthew, committed suicide at the age of 27, after a long struggle with mental illness. On Monday, Megyn Kelly‘s panel took on some of the “despicable” reaction that followed — questioning why the pastor isn’t afforded basic compassion by some of his critics.

Noting the “shocking” and “disgusting” vitriol directed at the pastor following the news, Kelly declined to “give a voice to the haters.” Father Jonathan Morris, a Fox News contributor, agreed, deeming the attacks “ridiculous,” “tasteless,” and simply “very sad.”

“Pastor Warren has been a great man for our country,” he added. “He’s offered a faith-filled, but also a rational and love-filled, voice of moral reasoning.”

Citing his own theological differences with the pastor, Morris related his own experience of being treated kindly and as a friend by Warren. “You think in this country some things are still inviolate,” Kelly remarked, noting that hasn’t appeared to be case. “The birth of a baby, the loss of a child.”

Family Research Council’s Tony Perkins recalled a time in this country when, despite disagreement, “we would take a break when someone suffered such a great tragedy.” He further went on to cite the pastor’s work, how he’s been “out front” on the issue of AIDS and “done so much to reach out, to mitigate the consequences, the things that have been associated with promiscuity — and yet those very people have been some of the ones who have said the most hateful and vicious things about him.”

The panel agreed without reservation that we need to “take a break.” That a parent’s grief should not be intruded upon by this type of criticism. Perkins and Morris were both full of praise for Warren and touted his work, which led Kelly to ask about the pastor’s opposition to gay marriage (the issue she pinned to a large portion of the attacks). There’s irony, she remarked, that this some of those who want tolerance and acceptance, “are very willing to pass judgment, alienate, attack, and go about in a way that may be undermining the very thing they seek.”

Citing the basic decency in showing compassion for the pastor’s loss, Perkins agreed that it doesn’t reflect well on those criticizing. “There are some things we just cannot explain,” he added, “and this is one of those cases.”