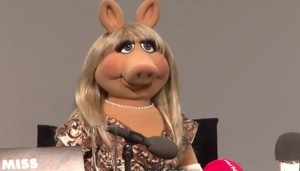 Months after the fact, the Muppets are still making hay over Fox Business host (and Fox News regular) Eric Bolling‘s attack on their recent movie as an anti-capitalist tool to brainwash children. At a London press conference to promote The Muppets‘ UK release, Kermit D. Frog, himself a former TV news personality, defended the film against the charge, but it was Miss Piggy who delivered the coup de grace, calling the accusation “laughable as accusing Fox News as being News.”

The Muppets marked the return of Jim Henson‘s creations to the big screen for the first time in a dozen years, and was warmly greeted by audiences to the tune of over $100 million worldwide box office, and counting. They were also greeted by the humorless likes of Eric Bolling and MRC’s Dan Gainor, who criticized the film’s environmental themes, and its central villain, oil mogul Tex Richman.

At a press conference to promote the film’s London premiere, a reporter asked Kermit to comment on the criticism. Frog denied the accusation that their film was anti-oil, asking why, then, would they “spend the entire film driving around in a gas-guzzling Rolls Royce?”

“That’s going to be all over the internet!” Frog chided.

It’s worth noting that, while Bolling is a regular on Fox News, his remarks were made on the Fox Business Network.

Fox News hasn’t responded to Miss Piggy’s remarks yet, probably because they’re trying to figure out how to translate the sound of bacon sizzling in a frying pan into a press release.