Reliable Sources Panel Knocks 60 Minutes: ‘Who Deputized CBS’ to Tell NSA’s Side of the Story?
video

Reliable Sources Panel Knocks 60 Minutes: ‘Who Deputized CBS’ to Tell NSA’s Side of the Story? 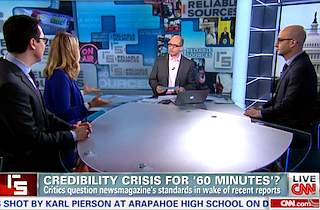 During an in-depth discussion of 60 Minutes’ widely-maligned segment on the National Security Agency, a Reliable Sources panel debated whether sources had too much leverage over journalists, to the point of controlling the tone and severity of interviews.

“These are long segments that 60 Minutes is doing, they have plenty of time to really press these people,” Huffington Post media reporter Michael Calderone said. “With a really secretive person like Jeff Bezos—journalists would kill to get a minute with him, let alone the access [Charlie Rose] got, and they basically got to promote this drone story, which was everywhere on cyber-Monday, right as people were going to turn to Amazon.”

“This last week, we had three different reports about the NSA,” The New Yorker’s Ryan Lizza said. “We had 60 Minutes, we had a federal judge, and we had a White House panel. So three of the four branches of government told you something about NSA. Unfortunately the one that was the most pro-NSA and had the least criticism was the one by 60 Minutes.”

“Who deputized CBS to say, ‘You’ve heard all the negative criticism, so we’re going to give you the other side of the story?'” said former NPR ombudsman Alicia Shepard.

“I did not understand that justification,” Lizza said. “60 Minutes has a huge platform—15 to 20 million viewers. A lot of those viewer probably not are familiar with that story. It’s a big, confusing story, that requires somebody with the resources of 60 Minutes to take a step back and tell the whole thing, not just assume that, ‘Oh, viewers out there have been listening to critics bash the thing, so let’s give the NSA the chance to respond.’ That’s not good journalism.”