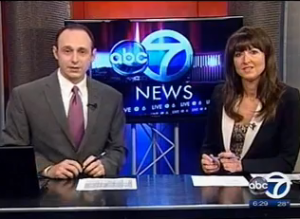 During their 6 p.m. newscast last night, Bangor-based TV news anchors Cindy Michaels and Tony Consiglio resigned on air, citing, as the Bangor Daily News has described it, “a longstanding battle with upper management over journalistic practices at their Bangor TV stations.”

While WVII/WFVX vice president and general manager Mike Palmer called the situation “unfortunate, but not unexpected,” the two had not told anyone about their plans to resign before the night’s newscast.

Consiglio shared that “I just wanted to know that I was doing the best job I could and was being honest and ethical as a journalist, and I thought there were times when I wasn’t able to do that.”

Michaels explained that the two had “figured if we had tendered our resignations off the air, we would not have been allowed to say goodbye to the community on the air and that was really important for us to do that.” She adds that there “was a constant disrespecting and belittling of staff and we both felt there was a lack of knowledge from ownership and upper management in running a newsroom to the extent that I was not allowed to structure and direct them professionally. I couldn’t do everything I wanted to as a news director. There was a regular undoing of decisions.”

Palmer maintains that upper management is not involved in the daily production of the news.

Watch their resignation, below, via WVII: