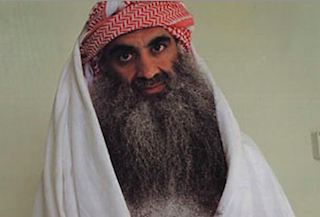 Khalid Sheikh Mohammed, the mastermind behind the September 11th attacks who has been in military custody at Guantanamo Bay since 2006, has released a new manifesto that contains a major reversal regarding the use of violence to spread Islam. According to the document, obtained by The Huffington Post, KSM (as he is often called) now believes that “The Holy Quran forbids us to use force as a means of converting.”

KSM spends most of the 36-page document trying to convince his captors to convert to Islam. “It is my religious duty in dealing with any non-Muslims such as the people in the court (the Judge, the prosecution, attorneys, etc.) to invite them to embrace Islam,” he writes. “I realize very well that you have heard about Islam and know much about it. But it is my own belief that Allah will ask me on the Day of Judgment why I did not invite these people to Islam?”

He attempts to dispel the theory that al-Qaeda and other jihadists fight against Americans because they hate U.S. freedoms. “Do not believe those who claim that the Mujahedeen fight infidels to turn them to Islam or that we are fighting you because you practise democracy, freedom or claim that you uphold human rights,” he writes, accusing both the media and U.S. intelligence services of misleading the public on this point. “They hide from them why the Mujahedeen carried out 9/11 and what the truth is about the War on Terror.”

One other issue that KSM touches on in the document is same-sex marriage, which he claims will lead to the breakdown of the family and society. According to KSM, the “Westerner’s God says men and women are free to do whatever they want to do,” he writes, saying that as long as “Congress or Parliament agrees to such a thing…. a man can marry a man or a woman can marry a woman, but by God’s laws, these acts are considered social crimes and it will cause unhappiness in their life, it breaks their families and at the end it will break the whole society.”