Anti-Immigration Activist: Public Execution Would Be ‘Too Good’ for Obama
video

Anti-Immigration Activist: Public Execution Would Be ‘Too Good’ for Obama 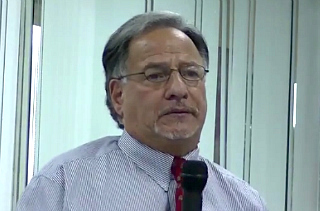 Last week Stephen Steinlight, a senior policy analyst for the Center for Immigration Studies, spoke in front of a Tea Party group in Sebring, Fla. As you might expect in such a setting, this was not what you might call a particularly immigration-friendly gathering. Nonetheless, Steinlight, being a representative of a group that calls itself an “independent, non-partisan, non-profit, research organization,” played it straight down the middle in his fair-minded assessment of the immigration issue. That is, of course, if you think saying the president should be executed counts as fair.

Calling House Speaker John Boehner’s definitely worthwhile and completely rational plan to sue the president a political loser, Steinlight then segued into a sidebar on how unchecked Obama’s power has become, as Imagine2050 reported. “There’s no court that’s going to stop Obama from doing anything,” he said.

So what are the options for conservatives of good faith for dealing with such an out of control executive? Steinlight has an idea:

“We all know, if there ever was a president that deserved to be impeached, it’s this guy. Alright? And I wouldn’t stop. I would think being hung, drawn, and quartered is probably too good for him.”

A video of the remarks can be seen below at the 37:18 mark. Looks like a solid crowd.

The Center for Immigrations studies, which, again, purports to be a non-partisan group, (they’re the ones who released the numbers about Obama releasing 36,000 undocumented criminals a few months back) describes Steinlight as “One of the nation’s most insightful voices on immigration.”

Not sure any of those words mean what they think they mean, but okay, let’s move on.

When he’s not advocating for the Medieval torture and murder of the president, Steinlight is no stranger to other imaginative musings. Steinlight has spoken about taking a baseball bat to religious leaders who support amnesty for immigrants, and said it’s likely the U.S. government will go into Texas and disarm citizens if they try to do anything about people crossing the border. He’s also speculated about what America would look like if immigration continued unabated. “In sum, we’ll witness the unmaking of America,” he said. Not only will that mean a change in our cultural demographic, it would literally throw the balance of political power off its axis, creating a permanent majority for the left which will last for a thousand years (or something).

Immigrants don’t just literally post an imminent threat to your ability to vote, they’ll also make the country an easier target for terrorists, he says, which I believe counts as paranoid right-winger Bingo right there.

Wait! There’s more: Immigrants will also take money right out of the pockets of hard working lower income Americans and make it harder for African Americans to find jobs, two groups of people he definitely cares about, and he’d also like to bring back a subversives control act in order to keep better tabs on people who oppose the government.

Anyway, that’s the guy from the non-partisan immigration think tank who is one of the most insightful minds on immigration.