Best Tidbit In WikiLeaks Cables? An Iranian General Slapped Ahmadinejad In The Face 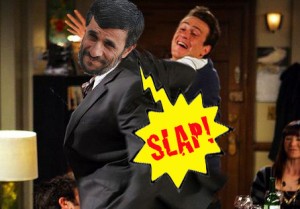 Throughout the hubbub over WikiLeaks recent batches of leaked cables, many people have pointed out that a large amount of the content is material the public may not have known, but probably could have guessed. Well, this story is certainly not like that at all. Der Spiegel reports an incident that took place during the furor over Iran’s disputed 2009 election in which a general for Iran’s Revolutionary Guard reportedly slapped President Mahmoud Ahmadinejad across the face. Now that’s some juicy classified information.

The source of the information’s name has been redacted, but The New York Times points out that he has been described in the past as “a former Iranian revolutionary activist who ‘has reported accurately on several sensitive political and economic issues.’” They also have the full story from the cable which reads as such:

“2. (S) According to source, President Ahmedinejad surprised other SNSC members by taking a surprisingly liberal posture during a mid January post-Ashura meeting of the SNSC called to discuss next steps on dealing with opposition protests. Source said that Ahmedinejad claimed that “people feel suffocated,” and mused that to defuse the situation it may be necessary to allow more personal and social freedoms, including more freedom of the press.

3. (S) According to source, Ahmedinejad’s statements infuriated Revolutionary Guard Chief of Staff Mohammed Ali Jafari, who exclaimed “You are wrong! (In fact) it is YOU who created this mess! And now you say give more freedom to the press?!” Source said that Jafarli then slapped Ahmedinejad in the face, causing an uproar and an immediate call for a break in the meeting, which was never resumed. Source said that SNSC did not meet again for another two weeks, after Ayatollah Janati succesfully acted as a “peacemaker” between Jafarli and Ahmedinejad. Source added that the break in the SNSC meeting, but not the slap that caused it, has made its way on to some Iranian blogs.”

Obviously, we will never know if this incident really took place. The Revolutionary Guard already denied the story when the cables were first published a year ago. But, we can still imagine it. Using the power of Photoshop above, we’ve imagined it looked something like the scene from the “Slapsgiving” episode of How I Met Your Mother. We’re weird though.