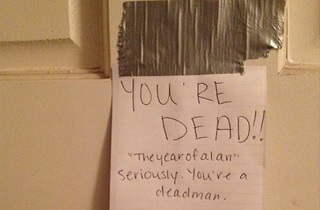 On Thursday, Bachelorette producer Elan Gale entertained America by live-tweeting his profane note-passing feud with an obnoxious fellow passenger named “Diane” aboard a delayed Turkey Day flight. Now, several bloggers are calling Gale’s account into question by dint of a history of this sort of thing, and even accusing the internet of sexism for so readily believing Gale’s drama, when similar stories with the genders reversed have faced relentless scrutiny.

In case you missed it, Gale sent a series of tweets Thursday describing an obnoxious passenger who loudly berated the flight crew about the urgency of her own holiday plans, complete with photos of the notes he sent to “Diane” to put her in her place, all of which culminated in a slap. Grantland‘s Tess Lynch, though, points out Gale’s prior history of social media invention, and casts doubt on the latest drama:

After the story went viral, a commenter who identified him- or herself as Diane’s cousin posted a response on Storify. Why was Diane so anxious to get on her connecting flight, and why was her breathing audible to Gale, who commented on it several times during the course of his report? Well, according to the commenter, it’s because Diane has “stage IV small cell lung cancer” (ah, so that explains the mask on her “idiot face”). The cousin wrote that Diane “was very contrite and upset” about being rude to the flight attendant, but she “hasn’t been handling her imminent death very well.” Oh God, the regret! Those giggles over dick cannibalism so misspent! It was not a good moment for #TeamElan. But then something occurred to us, though it didn’t get as much press coverage: This could be one massive, emotionally manipulative troll move.

…Ideally, there is no Diane at all, and Gale is just producing his own social-media reality distraction with invented characters, points and counterpoints, and a lot of moral ambiguity — Fakes on a Plane. Unfortunately, I doubt it. In an effort to teach people how to be nice (and to get plenty of attention for this lesson), Gale showed us how little he knew about kindness.

Lynch also references model Melissa Stetten, whose own social media mini-epic received lots of skepticism, and worse, and who wonders why no one questions Gale’s story:

Why does this bug me? I’ve done both real and fake funny twitter things. I posted a fake winning lottery ticket that got picked up by a few media sites, but I admitted it was fake a few hours later. I got harassed, berated, and endlessly questioned for my Brian Presley live-tweeting that people still ask me if it actually happened. Yes, it was completely true. I had websites writing about how I was taking anti-depressants so I MUST be lying. People went deep into my history to try to prove me wrong. The Daily Mail claimed I was a liar because I dated a radio show host who likes “radio pranks.” Is it because I’m a woman who confronted a guy that my story needed to be set straight? Had Elan been a woman, and the passenger a guy, would more people think he was lying? The story itself doesn’t bother me, just that it’s being accepted so easily. I’m sure if someone wanted to really investigate it, they could get a report from the airport where he was slapped or ask the airline attendants if it actually happened. I find it hard to believe an employee wouldn’t report violent behavior, since “Diane” was boarding a connecting flight. Any type of violence in any airport would cause the police to be called, especially since the recent shooting at LAX.

…If I were to dig deeper into the “Diane” story I could simply Google Elan and see his history with similar online incidents:

1. Neighbor drama posted on Tumblr. Notes being left on doors, Elan claiming to have sent flowers to his neighbor’s girlfriend to cause drama. Also, the note left on Elan’s door had quotes around his name too, just saying. Why hasn’t anyone examined this and questioned him?

…I was torn apart after I live-tweeted that douche bag actor, and the female server was investigated too. Why is Elan not being questioned? Why are women the only ones being questioned? Is it as simple a reason as misogyny? Women aren’t as powerful as men, therefore their actions must be questioned?

The short answer is, of course it’s sexism. Not only does Gale’s story benefit from de facto white male credibility, it also reinforces the same uppity bitch stereotype of women that drove Melissa Stetten’s skeptics. That’s what’s called “too good to check.”

I didn’t pay much attention to Gale’s latest story, which he stands by so far, but now that Stetten and Lynch mention it, there are serious flaws in it. For example, it is entirely plausible that a passenger would send another passenger a glass of wine, and somewhat less plausible that a flight attendant would also deliver a nasty note to an already-antagonistic customer, but it seems fatally implausible that the flight crew would first deliver said drink to Elan’s tray table for photographing.

Even without thinking about it, I think I uncovered the most damning smoking gun when I tweeted “Kudos to @theyearofelan and Diane for using correct forms of ‘you’re’ and ‘your.’ Everybody wins”

The idea that two different people could manage this feat is next to impossible, but it turns out that the neighbors he also feuded with through notes pulled it off, too. Inconceivable.

Update: Yep, it was all bullshit: 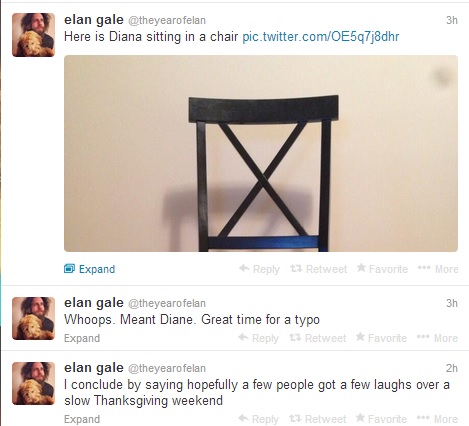