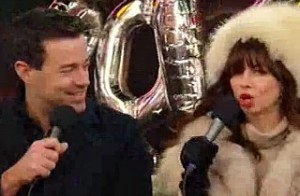 Comedienne Natasha Leggero got some flak for a quip about Pearl Harbor veterans only being able to chew SpaghettiO’s on NBC’s New Year’s Eve special with Carson Daly, and on Friday she responded to the “creatively misspelled death threats, rape fantasies and most of all repeated use of the the C word” that she got in response, refusing to apologize for what was nothing more than a joke.

Leggero posted a lengthy explanation on her website and Tumblr on all the online hate and why it’s not worth apologizing for the simple joke.

I wish I could apologize, but do you really want another insincere apology that you know is just an attempt at damage control and not a real admission of guilt? Let me just try instead to be honest.

I’m not sorry. I don’t think the amazing courage of American veterans and specifically those who survived Pearl Harbor is in any way diminished by a comedian making a joke about dentures on television. Do we really believe that the people who fought and defended our freedom against Nazis and the Axis powers will find a joke about Spaghetti O’s too much to bear?

And to really hammer the point home, Leggero notes that rather than getting worked up over a joke that might have offended veterans, people should maybe care more about the welfare and well-being of these veterans, encouraging people to make a donation to the Disabled American Veterans foundation.

Where do you think your outrage and action would be better served, calling me a cunt or doing something about the above problems?

You can watch the video of the joke that caused all this in the first place, via NBC: