Conservative Journalist Banned From Participating in University Debate on Censorship 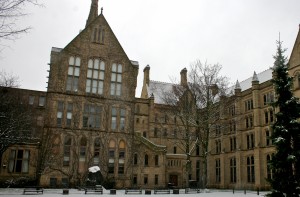 The University of Manchester Student Union has banned Breitbart editor Milo Yiannopoulos and Guardian journalist Julie Bindel from participating in a debate on whether or not modern feminists stifle free speech.

Bindel was the first to be banned from the British university. “The Students’ Union has decided to deny this request based on Bindel’s views and comments towards trans people, which we believe could incite hatred towards and exclusion of our trans students,” they wrote. Bindel, who identifies as a radical feminist and a lesbian, is also a critic of transexuality and gender reassignment surgery.

At first, Yiannopoulos joked about being allowed to attend, saying he’d have to “up his game.” But sure enough, he was banned soon thereafter. In their statement explaining their decision, the Student Union called him a “professional misogynist” and “rape apologist.”

Yiannopoulos is much loathed by feminists and much beloved by their critics, especially in the Gamergate movement. Most recently, he was kicked out Los Angeles’ “Slut Walk” for challenging its founder and carrying a sign calling rape culture a fantasy. Back in May, a pro-Gamergate event headlined by Yiannopoulos was the victim of a bomb threat.

According to the “safe space” policy Yiannopoulos and Bindel are accused of breaking, the University of Manchester believes free speech “should not be to the detriment of the rights of other individuals and groups. Freedom of speech is important, yet intention to incite hatred is never acceptable.”