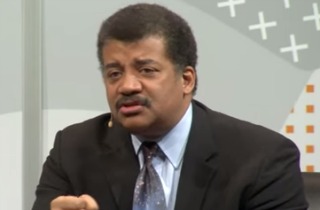 During the middle of an interview with The Daily Beast, renowned astrophysicist Neil DeGrasse Tyson shared his thoughts on religion, giving a surprising defense of Scientology (“So, you have people who are certain that a man in a robe transforms a cracker into the literal body of Jesus saying that what goes on in Scientology is crazy?”) — and, from that, asking how it is that homophobia could be legalized.

“The Constitution makes no mention of Jesus, God, or anything,” Tyson argued. “The Constitution is religion-free on purpose, which I’ve read was controversial. They were smart. They said, ‘Well, if we mention god, then it establishes a religion, and that would give the government power to influence your belief system, and you would no longer have a free country.'”

When asked how this extended to the recent proliferation of politically-motivated religious freedom bills — like that one recently enacted in Indiana that could be used to discriminate against LGBT customers — Tyson admitted that the law’s entire premise confused him. “I just think it’s a little weird that there’s a law that allows you to earn less money,” he said. “I think that’s weird within a capitalist democracy. If you’re a company and you don’t agree with it, you don’t put your factories there, and I don’t think that’s good for your economy. Usually the economy wins in the end in terms of decision-making, so we’ll see what comes of this.”

And as to how he viewed homophobia from the perspective of a scientist, Tyson noted that homophobia “almost always entirely stems from religion”:

But the point here is that if you’re religious, and your religion tells you that being gay is bad, then don’t be gay. But you have to remind yourself that that’s your belief system, and there are other belief systems that don’t agree with that, so you should not be in the position to make legislation that affects other people.

[The Daily Beast]
[Image via screenshot]