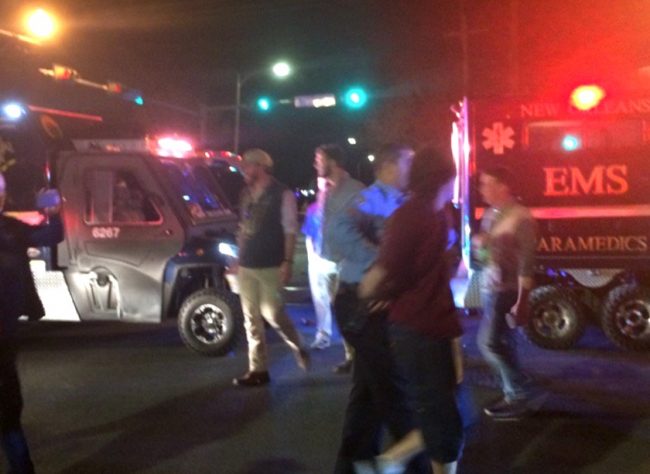 At least a dozen people were reported injured in New Orleans on Saturday after a truck crashed into a crowd of observers at a Mardi Gras parade.

WDSU reports that at around 7 p.m. local time, the vehicle ran into the Mid-City crowd at Orleans and Carrollton Avenue. An investigation is underway, though 12 people have been hospitalized, and they are reportedly in critical condition.

#BREAKING According to NOPD, the number of people injured could increase as the investigation continues

Endymion was rolling at the time the vehicles plowed onto parade watchers on neutral ground at Carrollton and Orleans.

UPDATE – 9:08 p.m. EST: WDSU has footage from the scene, and local police will soon hold a press meeting about the incident:

UPDATE – 9:13 p.m. EST: Police say that 21 people have been transported to the hospital. The driver responsible for the crash was said to have hit multiple vehicles before crashing into parade watchers, and police have said that the incident currently seems to be due to drunk driving, not terrorism.

“It appears that it was a subject who was highly intoxicated who struck a number of vehicles and then veered off, hitting a whole bunch of innocent people,” said New Orleans Police Superintendent Michael Harrison.

An arrest was made at the scene:

UPDATE – 9:36 p.m. EST: The injury total has gone up, though there are no confirmed fatalities as of yet:

This story is developing, and we shall add new details as they come.