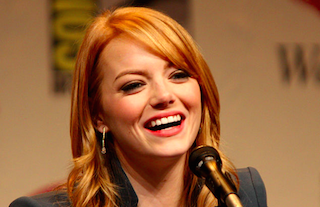 Last September, when the prospect of an all-female Ghostbusters reboot was still just a fantasy in the minds of nerds everywhere, Bill Murray was asked to pick his ideal lineup of funny ladies to star in the hypothetical film.

In addition to Kristen Wiig and Melissa McCarthy, Murray named Freaks and Geeks’ Linda Cardellini and his Zombieland (and later Aloha) co-star Emma Stone. But while Wiig and McCarthy did ultimately end up getting cast in the Paul Feig-directed movie, along with SNL cast members Kate McKinnon and Leslie Jones, Stone was left out.

In a new interview with the Wall Street Journal on Wednesday, Stone confirmed that she was offered one of the roles, but decided to turn it down.

“The script was really funny,” she said. “It just didn’t feel like the right time for me. A franchise is a big commitment—it’s a whole thing. I think maybe I need a minute before I dive back into that water.”

Since leaving the genre fare behind, Stone has decided to focus on slightly more highbrow projects — her turn as a part-Asian fighter pilot in the critically-panned Aloha notwithstanding. Following her Oscar-nominated role in Birdman comes her second collaboration with Woody Allen, which casts her as a young love interest for a professor played by Joaquin Phoenix.