Everything Is Lies: Gosling and McAdams Hated Each Other While Filming The Notebook 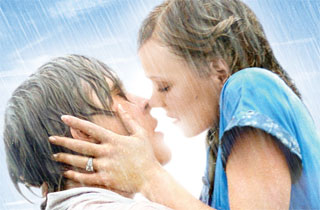 Today’s been ruined. RUINED, we tell you! Why? Only because Ryan Gosling and Rachel McAdams, the stars of the The Notebook, apparently hated each other while filming the greatest romantic movie in the history of all film. What’s next? Are you going to tell us that they were paid to pretend that they were in love? Like actors?! Take your lies elsewhere.

In an interview with VH1, Notebook director Nick Cassavetes finally broke his ten-year silence and revealed that, at one point during the filming, Gosling threw a fit at the prospect of having to work with McAdams. “Maybe I’m not supposed to tell this story,” he said, “but they were really not getting along one day on set”:

Ryan came to me, and there’s 150 people standing in this big scene, and he says, “Nick come here.” And he’s doing a scene with Rachel and he says, “Would you take her out of here and bring in another actress to read off camera with me?” I said, “What?” He says, “I can’t. I can’t do it with her. I’m just not getting anything from this.”

But like in The Notebook, all the problems were solved by the two main characters dramatically screaming at each other:

We went into a room with a producer; they started screaming and yelling at each other. I walked out. At that point I was smoking cigarettes. I smoked a cigarette and everybody came out like, “All right let’s do this.” And it got better after that, you know? They had it out… I think Ryan respected her for standing up for her character and Rachel was happy to get that out in the open. The rest of the film wasn’t smooth sailing, but it was smoother sailing.

And then the two of them dated for three years after the filming, so there was apparently some truth to their chemistry and love.

(Disclaimer: I have not actually seen The Notebook, but I am well aware that there is a lot of screaming that happens in it.)