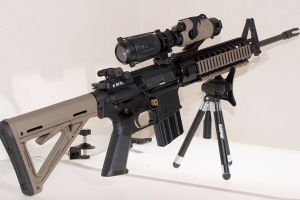 Today, we learned that the previously-reported gun used by the Orlando shooter in his massacre of a gay club was not actually the gun he used. He used a Sig Sauer MCX, not an AR-15. The guns are similar but not the same.

Much of their similarity can be found in the fact that both are capable of killing a large number of people in a very short time, so critics are still saying that it’s wildly inappropriate for Tennessee’s Representative Andy Holt to continue with his plan to give away an AR-15 as a door prize at an upcoming BBQ.

Holt, who you may know best as the sate rep who burned his traffic tickets on camera, has responded to the criticism of his door prize by doubling the offer:

Here is how Commercial Appeal quoted him:

“It has nothing to do with the style of weapon. It has everything to do with who’s behind the weapon,” said Holt, who has sponsored several gun bills, including one recently enacted law that allows full-time employees at Tennessee colleges and universities to carry weapons on campus.

Holt said the weapon is the type that can be used for multiple purposes including hunting, target shooting and self-defense.

He said the only thing wrong with the AR-15 is that “it’s black and it looks real scary” adding, “If I beat somebody to death with a hammer that’s just a hammer. But if I was to take and wrap it up in electrical tape and make it black I guess that would make it an assault hammer.”

@AndyHolt4TN @shellyamberston-If the “door prize” gun is used in a crime Holt should be arrested. Shameful and disgraceful. #worsttimingever

Unfortunately, some detractors have begun threatening Holt, as shown in the following video, during which his legislative assistant, Michael Lotfi, can be heard talking to a threatening man from Memphis:

It’s always strange when people fight violence with violence, but most of those who have spoken out against Holt’s plan to reward a BBQ attendee or two with a rifle have not made threats.

Tennessee Democratic Party Chair Mary Mancini simply said, “We’re furious that in the wake of this tragedy, state Rep. Andy Holt is being such a reckless and irresponsible gun owner … Andy Holt doesn’t know if he’s putting the winning raffle ticket in the hands of the next mass shooter.”

Sure, Holt is within his legal rights to do what he’s doing, but for fun, just imagine trying to explain to someone from Canada or Norway that in America, people who show up to a BBQ have a chance to win deadly assault rifles as door prizes. This definitely solidifies every stereotype held about American culture.