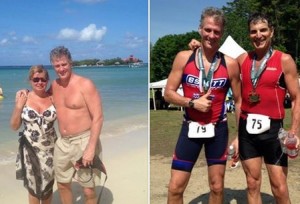 The Daily Beast‘s Olivia Nuzzi received a rather interesting email from former Mass. Sen. Scott Brown on Wednesday night — you know, the guy who relocated to New Hampshire and ran for state senator there after losing his seat to Elizabeth Warren. (He lost in New Hampshire, obviously.) Anyways, back to Nuzzi’s email…

Was Brown preparing to run for office again? Had he up and moved to yet another New England state to establish his residency before the next bout of elections? As it turns out, Brown was actually advertising his “recent weight loss” as the direct result of AdvoCare.

I shit you not. Sen. Brown is now selling diet pills, a fact later confirmed by AdvoCare to The Boston Globe.

Nuzzi makes sure to point out that she hadn’t actually signed up for Brown’s formulaic email. Instead, she’d contacted former Massachusetts resident about his Facebook post regarding his weight loss. Instead, his automated response tried to sell her crap:

“I am here to help you get started,” Brown’s email read. “As you can see from my story and pictures, these products from Advocare really do work.”

Brown went on to say that “as a fitness advocate” (he’s competed in half a dozen triathlons) “I am very skeptical about many products out there,” but his son-in-law, Keith, “used Advocare products through his 8 year professional baseball career” and that was enough to convince him to jeopardize his well-being for vanity.

“If you’re ready to get your health back on track,” Brown said, “allow Keith and me to get you signed up today!”

As our own Andrew Kirell puts it:

Meanwhile, I can’t help but wonder if Brown’s pickup truck — made (in)famous during both his Massachusetts and New Hampshire senate campaigns — is now sporting an AdvoCare decal. What would that old, reused commercial look like now?

As is evident on the original Facebook post, many of Brown’s followers and detractors are giving him some much-deserved hell for his AdvoCare work. However, as the Globe reminds readers, Bob Dole once pushed pills for Viagra. So yeah, just let that beautiful mental image sink in for a minute.

[h/t The Boston Globe, The Daily Beast]
[Image via Facebook]