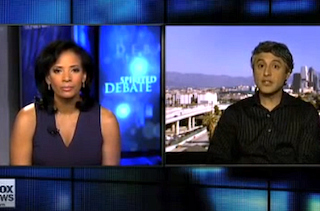 On the FoxNews.com show Spirited Debate, host Lauren Green repeatedly questioned the motives guest Reza Aslan, a Muslim and author of Zealot: The Life and Times of Jesus of Nazareth, had in writing a scholarly text about the historical Jesus Christ.

“To be clear, I am a scholar of religions with four degrees including one in the New Testament and fluency of biblical Greek, who has been studying the origins of Christianity for two decades, who also just happens to be a Muslim,” Aslan said.

“It still begs the question though: why would you be interested in the founder of Christianity?” Green asked.

“Because it’s my job as an academic,” Aslan said. “I am a professor of religion, including the New Testament. That’s what I do for a living.”

Green continued to ask Aslan about his motives, as Aslan grew more and more impatient with her imputations. “There are those who do not like the book, who are unhappy with its general arguments, and that’s fine,” Aslan said. “But I do think it’s perhaps a little bit strange that rather than debating the arguments of the book, we are debating the right of the scholar to actually write it.”

Finally Green accused him of hiding his faith. “You’ve been on several programs and never disclosed that you’re a Muslim,” she said, to which Aslan responded that his biography is on the second page of his book and stated in every interview.

For those curious, the conclusion Aslan came to about Jesus was that he was “a real political revolutionary, who took on the powers of his time on behalf of the poor, the meek, the dispossessed the marginalized, who sacrificed himself in his for those who couldn’t stand up for themselves.”

Watch the entire exchange below, via FoxNews.com: