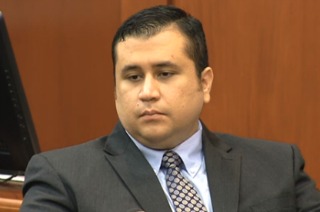 [This story has been updated. See below.]

According to officials, the recently-acquitted George Zimmerman is in custody as police investigate a “possible domestic battery” dispute.

Fox News reported around 2:54 p.m. that Zimmerman’s estranged wife, Shellie, called police to report that he was acting “aggressive.”

WKMG Orlando reports that “Lake Mary police say they were called to a house on Sprucewood Road Monday afternoon after a report that Zimmerman was involved in an altercation with another person with a threat involved.”

No other information was immediately available, as the police investigation is reportedly ongoing.

UPDATE: The Associated Press reports that Shellie Zimmerman called police, “saying [George] threatened her and her dad with a gun.”

UPDATE III: Fox News carried live footage from a helicopter above the home in question:

— —
UPDATE IV: ABC News reports that while Zimmerman is still in custody, his estranged wife and her father refuse to give sworn statements. And they reportedly will not press charges:

George Zimmerman remains detained. Estranged wife & her father refuse to give sworn statement; say they do not want to press charges.

UPDATE V: George Zimmerman’s brother, Robert, tweeted out a word of caution for those jumping to negative conclusions about his sibling’s detainment:

We've learned from GZ case not to "jump to conclusions", to wait for facts, & to avoid speculation. "News" is a business – not your friend.

UPDATE VII: MyFoxOrlando reports Zimmerman no longer in custody. Gun found at scene was not related to the incident:

Lake Mary Police say a weapon was present during the Zimmerman incident but NOT involved. #FOX35 @jorgekgonzalez @RockitBill

#GeorgeZimmerman no longer in police custody. Police continue to talk to him in Lake Mary house. #FOX35 @sonniabatta

[Ed. note: Headline has been updated to reflect that police have confirmed that firearm at scene was not related to the alleged incident.]