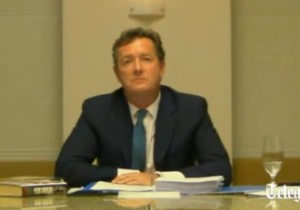 The Leveson Inquiry — a series of hearings on press standards in England, mostly centered around tabloid information-gathering via phone hacking and trash-rifling — dipped its toes into he-sad/she-said territory on Wednesday, as Heather Mills, the ex-wife of former Beatle Paul McCartney, issued a statement denying that she had played Piers Morgan lovelorn voicemails the rock legend had left for her, which eventually became the focus of a 2006 story in The Daily Mirror:

“For the avoidance of doubt, I can categorically state that I have never ever played Piers Morgan a tape of any kind, never mind a voice message from my ex-husband.

“Morgan is using me as his scapegoat and I would be more than happy to answer any questions that the inquiry would like to put to me.”

When Lord Justice Leveson interrupted the questioning and told Morgan that he could call Mills in to testify, Morgan, who was appearing through a video link, noted that in their divorce proceedings, “Paul McCartney stated as a fact that she had recorded their conversations and given them to the media.”

Watch video of Morgan testifying at the Leveson Inquiry below, courtesy of The Telegraph: