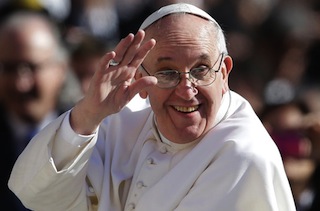 Langone is involved with Dolan in a $180 million restoration project of St. Patrick’s Cathedral in New York City, but informed the cardinal that one potential “seven-figure” donor was unhappy with the pontiff’s criticism of free markets—comments which have already angered conservative pundits and been called “Marxist” by Rush Limbaugh.

“I’ve told the cardinal, ‘Your Eminence, this is one more hurdle I hope we don’t have to deal with,'” Langone said to CNBC. “‘You want to be careful about generalities. Rich people in one country don’t act the same as rich people in another country.'”

Dolan said Langone approached him recently about the remarks, saying, “You come to us who have been blessed, who are wealthy, and yet we sense that perhaps the Pope is less enthusiastic about us. We need to correct that.”

In a separate interview with George Stephanopoulos, Dolan praised Pope Francis for “shattering the caricature” of the Catholic Church.

Watch the full clip below, via CNBC: