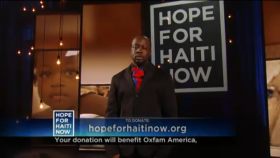 The performances are beautiful but the stories told are truly tragic, and harrowing — what Wyclef Jean had to say about what he’s been doing in Haiti, moving rubble and burying friends, should quell some of the noise about his Yele Haiti finances, for a bit at least — but for now, this is about people putting all that (even that line between journalist and advocate and celebrity) behind in order to come together to make a difference.

How to make it:

There are many ways viewers can contribute to the telethon. Donations can be made online at HopeForHaitiNow.org, over the phone by calling (877) 99-HAITI, by texting the word “GIVE” to 50555 or by mail addressed to Hope for Haiti Now Fund, Entertainment Industry Foundation, 1201 West 5th St., Suite T-700, Los Angeles, CA, 90017.