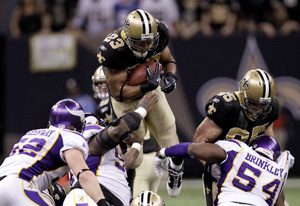 Divisional playoff weekend concludes with what figures to be an outstanding matchup — this round’s best, on paper — between the Minnesota Vikings and the New Orleans Saints at U.S. Bank Stadium in Minnesota.

The Vikings have a major chance to become the first-ever team to play the Super Bowl in their home stadium. The NFC’s No. 2 seed is arguably the most complete team in the entire field. Their defense has been outstanding. And their offense — led by unlikely star Case Keenum — has been eye-catching in their own right. This is a terrific squad, and a worthy favorite to represent the NFC in the big game three weeks from today.

The Saints are not without a chance, though — largely because they’ll get to play on their preferred fast track inside the domed U.S. Bank Stadium. Drew Brees and the Saints offense can still put up points in bunches, and might be the rare team to have some favorable matchups against the Minnesota defense. The game seems unlikely to be a shootout, though. And so the Saints defense will have to keep the Vikings offense in check.

Kickoff is shortly after 4:30 p.m. ET. The game will air on FOX. Joe Buck and Troy Aikman have the call. The action can be streamed free with a cable subscription on pc, cell phone, or tablet via Fox Sports Go — which can be found here. The Fox Sports Go app can be downloaded via both the iTunes store, and the Google Play store.