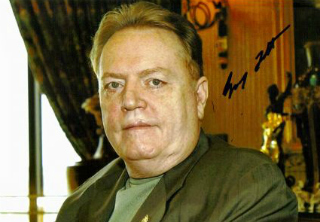 One day after controversy broke out over Hustler‘s publication of a parodical photo of conservative pundit S.E. Cupp performing oral sex, publisher Larry Flynt responded to his critics, dismissing them as “the prudish and delusional right wing,” who need to “get a life” and “find another horse to beat.”

As the result of our publishing an ad parody of political pundit S.E. Cupp that depicted her having oral sex, the prudish and delusional right wing has accused me and my magazine of being sexist and waging a war on women. That’s absurd. The picture was clearly labeled as satire. It was intended as humorous commentary about her politics. We stated that no such image of Ms. Cupp actually exists. Secondly, the feature, which we run every month, has previously depicted such male luminaries as Mario Cuomo, Dan Rather and, most recently, my friend Bill Maher. How misogynistic or sexist is that?

Flynt went on to explain that the image is protected by “free speech as decided by unanimous decision by the Supreme Court in 1988, Flynt v. Falwell.”

So critics, get a life. Find another horse to beat. We don’t know anything about Ms. Cupp’s personal life, but we do know that oral sex is practiced by the majority of adult Americans, both male and female. The fact that the picture of Ms. Cupp has generated so much flap says more about the sexual repression of the American people than it does anything else. Oral sex is a normal and healthy practice.