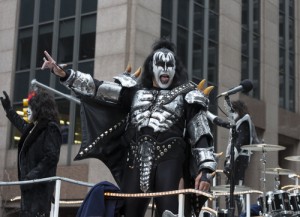 The Los Angeles Police Department reportedly searched for and confiscated several computers and related materials from the home of KISS rocker Gene Simmons.

According to TMZ, the raid was conducted as part of an LAPD unit dedicated to crimes against children, and that the confiscated computers may have been used to download or upload child pornography.

Neither Simmons nor anyone in his immediate family is a suspect, the report notes.

Details regarding the specifics of the case are vague, but Simmons’s spokesperson addressed the matter:

The rocker’s publicist said the police visit was connected with a crime that may have occurred on the property last year while Simmons was away touring with his band.

Authorities requested Simmons and his family not to discuss the case to avoid undermining the investigation, publicist Cheyanne Baker said in a statement.

Despite the police request, Simmons’s wife, Shannon Tweed tweeted about the incident:

Thanks for your support. We couldn’t be more horrified that someone used our residence for such heinous crimes. Law enforcement is on it.

Goodnight and don’t forget to change your passwords!!

In the comments section for Gawker‘s article, writer Andy Cush referenced a June piece about Steve Coronel, the former KISS songwriter (and supposed “personal friend of one Mr. Gene Simmons since 1963”) who was arrested in South Carolina last year for allegedly uploading child pornography. It’s a hell of a coincidence, but whether or not the two incidents are connected remains undetermined.