Mass. Gov. Patrick Reveals What He Did After Boston Manhunt: ‘I Was Actually Quite Drunk, By Myself’ 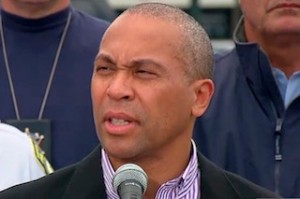 In a candid conversation with a Cambridge marketing firm yesterday, Massachusetts Governor Deval Patrick admitted he got “quite drunk” at a restaurant by himself the day after Boston bombing suspect Dzhokhar Tsarnaev was finally caught. According to a report in the Boston Herald, Patrick relayed the following story during a question and answer session.

“I got out to the Berkshires around supper time (Saturday, April 20). And I went for a quick swim, and I went to a local restaurant … for supper by myself with a book. And I sat in the corner and Maggie, who runs the (restaurant), asked, ‘Do you want to be near people or away from people?’ I said, ‘As far away as I can.’ So she put in the corner, me and my book on my iPad, and she starts bringing me things. Some of them edible. In fact all the food was edible. She starts bringing me things to drink as a celebration. And by the end of the meal, I was actually quite drunk, by myself.”

The Herald spoke to Maggie Merelle, co-owner of the West Stockbridge bistro Rouge, who said if Patrick was drunk, she couldn’t tell. “He wasn’t tipsy. I never would have known,” Merelle said, saying she remembers Patrick ordering duck confit, french fries, soup, salad and a “glass of chardonnay or two.”

Patrick also revealed the President Obama called him personally for an update on the city’s “shelter-in-place” order. Obama apparently asked him, “What are you going to do about the city? You can’t keep it locked down indefinitely.”

“I said, ‘Mr. President, I know that'” Patrick said. “‘I’m trying to sort that out now.’” He added that the backlash from Bostonians would have been worse had they not eventually found Tsarnaev hiding in a boat in Watertown that night. “The reason why it worked out in the end is because we found him,” Patrick said. “If we didn’t find him then people would be bitching and moaning about how we kept them indoors all day.”