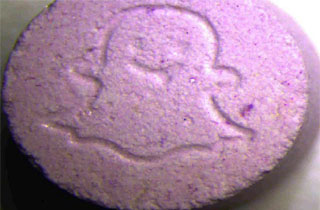 Hey, easily panicked parents: there’s a new scary designer drug called Snapchat on the streets of Australia, and it’s so scary that it hospitalized four fully grown men. It may be named after the photo sharing app popular with teenagers and sexters, but according to Australian authorities, the drug is so terrifying that it can cause malignant hypothermia, which can “essentially cook your brain.”

What is Snapchat, anyways? It’s basically a pink/blue pill, with the Snapchat ghost logo stamped on it, and its base ingredient is bath salts. So really, it’s bath salts. Bath salts is doing the heavy lifting here.)

So now that you are a parent, and we’ve scaremongered you real good, are you now adequately terrified that your child is either sending compromising photos to strangers, or huffing bath salts? Here is a guide to whether your child is on Snapchat or on Snapchat:

: They are using Snapchat.

Basically, no one should use Snapchat.

[h/t CNET]
[Image via the Northern Territory Police of Australia]