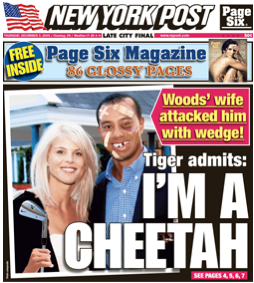 What is a Cheetah? Aside from a fleet-footed, graceful jungle cat, its colloquial meaning is becoming more imprecise by the day. The New York Observer yesterday tried to use the term to denote an imprecisely large group of women on indeterminate age and indeterminate attractiveness with indeterminate needs but the decidedly determined goal of having sex. Cover your eyes, children. Or, as Jezebel’s Irin Carmon noted, it’s “unclear what a “cheetah” actually is, except amalgam of lazy gchat reporting, cliches [and] double standards.” Which is probably the best definition of that Observer story.

But anyway! Aside from widely-reported feelings of disgust, readers were left with little in the way of hard reporting, or a hard definition for the word “Cheetah” — which just got a lot fuzzier thanks to the New York Post‘s cover today. “I’M A CHEETAH!” says Tiger Woods, on its photoshopped cover. It’s not a direct quote, it’s a pun: Tiger? Cheetah? Get it? But also, wait a second! Tiger’s a man! And he certainly doesn’t answer to the description in the Observer article, though the more information that comes out, the more he’s answering to the description of someone making bad decisions at the end of a boozy night. (Wait, you mean there could be guys that do that too? Wow!) Anyway, something that I’m sure seemed ever so clear on Tuesday night at the Observer offices certainly seems a lot murkier now.

Also, while we’re on the subject of the imprecise, indeterminate definition of “Cheetah,” is there a specific “Cheetah Woman?” Because Disney sort of locked down where exactly the “Cheetah Girls” fall along the spectrum: 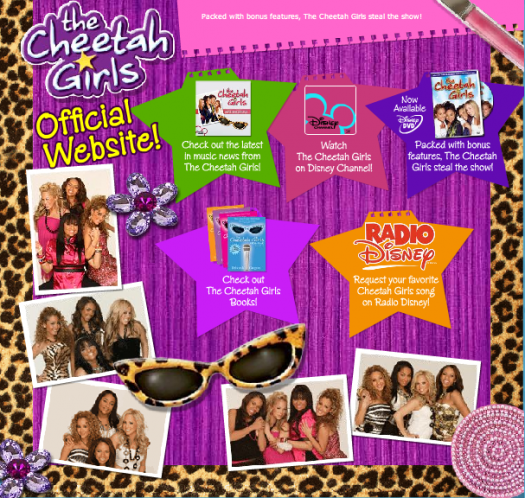 Putting women in one-dimensional sexualized categories according to their age is confusing! Below, Kathy Lee and Hoda go a bit Cheetah.