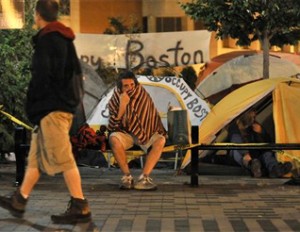 Thanks to Occupy Boston’s takeover of Dewey Square, the “Greenway Mobile Food Fest,” scheduled to take place this weekend, has been canceled. Organizers hope to reschedule the event for next spring. According to a statement posted on the Rose F. Kennedy Greenway site:

“The decision is based on the fact the attendees we’re anticipating for the Greenway Mobile Food Fest, when combined with the Occupy Boston encampment on Dewey Square, would simply be too crowded to be considered safe for the public. [On Tuesday], activists complied with the smooth load-in and load-out of the Boston Public Market, a successful farmer’s market on Dewey Square, but the scale of Saturday’s event is much, much bigger.”

This cancellation takes away plenty of profit from the dozen food trucks and vendors expected, which is essentially the antithesis (or at least close to the antithesis) of the Occupy movement — small business owners are now losing money. And where will that money go? Probably to more corporations. Who knows how many people who would have otherwise gone to the Food Fest for the grilled cheese stands, bocce, free music, and crafts, will now just go to McDonald’s, or order from Domino’s. Maybe parents will take their children to the mall. Perhaps, since the free food festival no longer exists, would-be event-goers will all be forced to take money they otherwise wouldn’t have spent out from a Chase bank — even though they’re Bank of America customers! — and incur ATM fees from both banks, giving Wall Streeters that much more power and money.

The cancellation also raises a particularly fun, possibly bittersweet scenario for Ben & Jerry’s. The company was planning on participating in the event before the cancellation, so they should probably be angry at the Occupy protesters for lost revenue and exposure. But, as luck would have it, the company came out in support of the Occupy movements earlier this week. So which side do they choose?

On top of it all, and on a serious note, the Food Fest was going to be a collection point for a Greater Boston Food Bank canned food drive. It might have been a nice opportunity for the Occupy people to curry some favor with the general public: show up in large numbers and flood the donation barrels with cans of food. Instead, the food bank is left without a high-traffic event to gather much-needed goods.

It’s probably a product of the largely-leaderless Occupy movement that nobody stood up and suggested that 50% of them leave the park so there wouldn’t be a crunch for the Food Fest. It would have been a PR coup on their end to step aside, let the small businesses make some money, help the food bank, and then return to the lawn late Saturday night, or even Sunday morning. The cops seem to be fine with letting the group stay in Dewey Square indefinitely, so — outside of some creative tactics — they’d probably be able to show up again after the festival and just lay their gear back down. As a bonus? A night sleeping in a bed.

But, for now, the city has Occupy Boston to thank for a canceled festival. Things are getting a little testy in the comments on the Fest’s Facebook page, Coyote Kolb will have to find another place to play on Saturday, and the Greater Boston Food Bank is left scrambling to make up for donations. Is it Occupy Boston being selfish? No. But they are being somewhat myopic. And in squandering a golden opportunity, they may have hurt the people they’re trying hardest to represent.