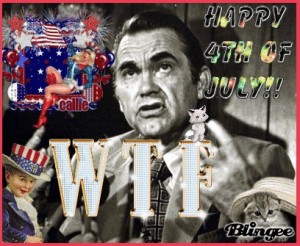 As the folks over at Bitch magazine’s blog pointed out earlier today, there’s something a little bit… off… about Esquire‘s list of “36 Reasons It’s (Still) Good to Be an American Man.” I mean, yes, it’s odd that the magazine would deem certain high points in America’s culture — like nitrate-rich meat products, artificial popcorn toppings and great comedic American comedian who does comedy, Jon Stewart — as being solely for the consumption and eventual heart failure of American men, but it’s also quite strange that the magazine would choose to include former Alabama governor George Wallace as a reason why it is (still) great to be an American male.

While Wallace would later renounce his original take on the issue, the man is still perhaps most famous for being pro-segregation. So of all the many, many American politicians and leaders who have risked so much to provide a better future for this nation, why choose a man who once proudly declared that “In the name of the greatest people that have ever trod this earth, I draw the line in the dust and toss the gauntlet before the feet of tyranny, and I say segregation today, segregation tomorrow, segregation forever” and who explained his focus on racial issues by saying that “I tried to talk about good roads and good schools and all these things that have been part of my career, and nobody listened. And then I began talking about niggers, and they stomped the floor”? *Collar pull.* Rubbing nitrates into the wound is the fact that civil rights activist Martin Luther King, Jr. appears on the same list. Yes: George Wallace comes up two slides behind MARTIN LUTHER KING, JR. on a list of reasons why being an American male is still awesome despite things like feminism and a revised food pyramid.

I reached out to the slideshow’s creator, sports and politics writer Charles P. Pierce, in an effort to answer my question (Specifically: “WTF?”), but he didn’t get back to me in time for posting. I will most certainly update, however, if and when he responds.

In the meantime, go watch some sports and consume a steak or three. For America.