On The Scene: The Thanksgiving Turkey Eating Contest In New York 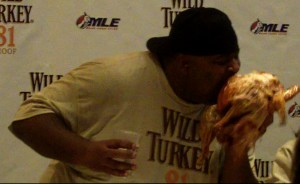 The Nathan’s Hot Dog Eating contest on Coney Island has become a Fourth of July tradition, so it stands to reason that another holiday with another traditional food — Thanksgiving and the turkey — deserved an eating competition of their own. Enter the Wild Turkey 81 Eating World Championship.

The competition, run by Major League Eating, the same group that brought you the Nathan’s contest (and featuring the same carnival-barking host), challenged seven eaters to down as much turkey as they could in a 10-minute window. The eaters were given a full Thanksgiving turkey, and the winner would be determined by weighing the carcass of the turkey after the 10 minutes were up.

“It’s hard to prepare for turkey — it’s hard to do it fast,” Pete “Pretty Boy” Davekos, who holds the world record for spinach eating, told Mediaite. “I prepared by eating all vegetables. I cut out all meats, got my body craving turkey.”

Maria “Edible”, one of two women in the competition, had a similar dietary regiment to prepare for gobbling down the gobblers. “Turkey is the hardest food, it requires more chewing. And there’s no dipping like Nathan’s Hot Dog eating competition. I ate a lot of lettuce to prepare,” she said.

“Edible” is one of the few female food eating competitors on the circuit, but feels her contemporaries give her more than enough support. “It’s becoming more accepting for women,” she explains. “There’s a lot of men, but I don’t care how big they are!” Davekos echoed the sentiment of the close-knit group. “It’s a fraternity of sorts — so few [people] are eating competitors, it’s a tight knit community.”

Sonya “The Black Widow” Thomas, who took home the first-ever all-female hot dog eating contest this past summer, eventually beat all competitors when the 10 minutes were up. She told ESPN’s Ken Derry that her strategy was to eat as much of the white meat as she could, then chase it with hot green tea to moisten the meat.

“The Black Widow, who will return to her job as a manager at a Burger King on Andrews Air Force Base in Maryland at week’s end,” Derry writes, “won by consuming 5.25 pounds of turkey.” Thomas’ number is even more impressive considering that the bones of the turkey make up a lot of the weight.

Also competing in the event were former Maxim favorite Crazy Legs Conti and Cristal chugger Kevin Strahle, who goes by the name “L.A. Beast.” It was Strahle’s first professional competition.

Enjoy Mediaite’s video of the event below, showcasing the sights and sounds of our day at the Wild Turkey 81 Eating World Championship (music by Gutz):