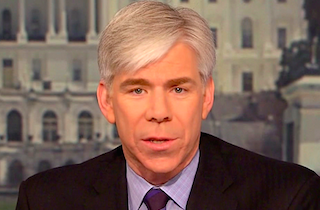 Since he was fired as moderator of NBC News’ Meet The Press, David Gregory has stayed deliberately out of the spotlight. So when he gave a speech at the Independent Community Bankers of America conference in Florida on Wednesday, he reportedly requested that his remarks remain “off the record,” despite the fact that no other events at the conference imposed such restrictions.

At least one reporter, Robert Barba of American Banker decided to flaunt that request. After retweeting a photo of the placard placed outside the event, Barba proceeded to tweet out quotes from Gregory’s speech as they happened, including his thoughts on potential presidential candidates from both side of the aisle:

Jeb has an advantage of experience and not being afraid to stand up to party, says @davidgregory cc: @mviser @ABWashBureau @mariaaspan

Obama's legacy: lame duck longer than he'd like to admit, didn't enjoy pol as much as his predecessors, says @davidgregory cc: @ABWashBureau

Is there a liberal bias? Yes, but also bias of culture, geo. Bias of conflict, says @davidgregory

"Very difficult to see how [@HillaryClinton] doesn't get the nomination," –@davidgregory even w/ personal email scandal

Asked by Politico’s Dylan Byers about the unusual situation, Rob Blackwell, the Washington Bureau Chief of American Banker said, “It seems pretty clear that Gregory asked for his comments to be off the record (because the rest of the conference was on the record), but you can’t get up in front of thousands of attendees and just declare your remarks are off the record, particularly when you’re a journalist and you should know better.”