Rick Perry Admits He ‘Stepped Right in It’ with Gay Comments 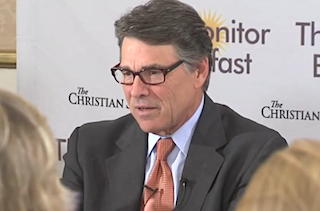 Over the past few days, Governor Rick Perry (R-TX) has been faced with a barrage of criticism over comments he made comparing alcoholism to homosexuality. And while he had mostly defended the substance of what he said, today Perry finally backed off, saying he “stepped right in it.” In other words, “Oops.”

“I got asked about issues and instead of saying ‘you know what, we need to be a really respectful and tolerant country to everybody,’ and get back to talking about, whether you’re gay or straight, you need to be having a job, and those are the focuses that I want to be involved with,” Perry said at a luncheon Thursday hosted by The Christian Science Monitor. “I readily admit, I stepped right in it.”

Perry said that the GOP needs to “be the party that’s going to talk to everybody, and say ‘listen, you may not agree with all of my positions but giving you and your family and your loved ones the opportunity to live a better life because we’ve created a climate in this country where you’re going to have a job and a good job and a good-paying job.”

“If we do that then I think we’ll be successful,” he said, instead of the spending “all of our time being deflected over on this social issue or that social issue.”

Perry also reiterated his insistence that gay rights and other social issues should be decided at the state level, saying Americans will be “happier” if they are allowed to “go live in environments in which they are most comfortable.” Of course, that means continuing on with a policy in which the LGBT community can have equal rights in states like California, but not in states like Texas.

Watch video below, via The Hill: