Sununu: Scott Brown Not a Carpetbagger, He Was ‘Born Virtually’ in New Hampshire
BIRTHERISM

Sununu: Scott Brown Not a Carpetbagger, He Was ‘Born Virtually’ in New Hampshire 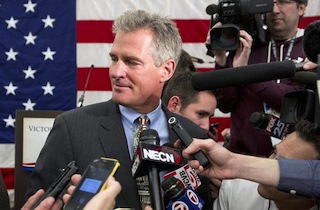 Scott Brown (R-Various), the former senator from Massachusetts now trying to unseat the current senator from New Hampshire, has found a new ally in his bid to escape the carpetbagger label: ex-New Hampshire Governor and former Romney surrogate John Sununu (R), who told Yahoo! News’ Chris Moody that Brown was “born virtually” in the Granite State, and that incumbent Jeanne Shaheen (D-NH) was the “third Senator from Massachusetts.”

Quoting Moody directly, as he nails it:

“We just gotta remind people that he’s coming back to his roots,” former New Hampshire Gov. John H. Sununu told me after the Portsmouth rally…To him, it is Shaheen, not Brown, who’s the real outsider.

“She votes with Elizabeth Warren. She votes with [Massachusetts Democratic Sen. Ed] Markey. She is the third senator from Massachusetts,” Sununu told supporters at the Portsmouth rally before introducing Brown. “Scott’s happiest days as a young man were in New Hampshire. …So it’s going to be great to have a senator that was born virtually in the state of New Hampshire. Jean Shaheen, by the way, was born in Missouri!”