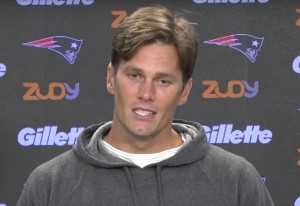 Tom Brady got a haircut, and the Internet laughed.

The New England Patriots quarterback unveiled his new hairstyle at a press conference Tuesday, and it was promptly met with sarcasm on Twitter. Megyn Kelly, Matt Damon, and Matthew Perry were just a few of the names invoked as people scrambled for a comparison.

Overall, the consensus is that Brady’s look is very, very 90s. Check out a small sampling of the responses below:

It pains me to say it, but Tom Brady needs another four weeks of suspension to grow out this Zack Morris haircut. pic.twitter.com/RDkkuIZ9r9

Tom Brady to barber: “I dunno, how something that says Matt Damon in School Ties?” | pic.twitter.com/8pkBSQDyl6

Are we to believe it’s purely coincidence that Tom Brady keeps rocking haircuts once worn by Jonathan Taylor Thomas? pic.twitter.com/1AWPmIexM9

Looks like Tom Brady is ready for back to school with his new hair cut. #BackToSchoolIn1995 pic.twitter.com/XwH6r2niqm

Tom Brady got his hair cut like a 90’s Power Ranger. pic.twitter.com/AAjgguuA4O

Didn’t know the @Patriots hired Gordon Bombay… I might have to start rooting for them #TomBrady #Hair #MightyDucks pic.twitter.com/dQzFUCE7rs

I know I am late to the party , but Tom Brady’s hair looks like he’s about to audition for friends. #Friends #TomBrady

I see #TomBrady‘s hair and I picture a guy who drives a mini van and wears socks with sandals while making terrible dad jokes.

Tuesday’s press conference was the last scheduled appearance for Brady before he begins serving his four game suspension for his role in the deflategate scandal — which means Pats QB will now get a chance for a, well, ‘do over.