The Wacky Side Of Corruption: A Clown Shows Up To Bell City Council Meeting! 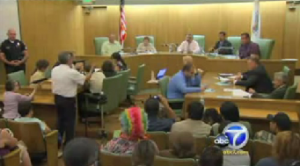 For those of you who haven’t been following the sordid case in the City of Bell, California, it is one of the worst examples of complete institutionalized corruption in recent memory (with my apologies to Charlie Rangel). The idea that these elected officials would overtax these working class constituents so as to pay for their ridiculous salaries that would be high for cities ten times the size just makes us furious. I mean, how could anyone hear this terrible story and not want to just- OH MY GOD, A CLOWN! YAY! LOOK AT THE CLOWN! LOOK AT THE CLOWN!

Yes, a clown stopped by Bell’s City Council yesterday to brighten up the nine hour meeting on whether or not to approve property tax cuts. The meeting was filled with screaming citizens and sheepish officials, both of which have become commonplace in the small town in the past few weeks, but the rainbow-wigged jokester was a bit of a novelty. He forced the enraged crowd to listen to some “hilarious” puns and all of the news outlets covering the meeting to decide how exactly to handle him.

Yes, my favorite part of the news clip below is that you can just picture the conversation they had while editing the piece. “Ugh, are we gonna mention the clown idiot?” “We’ve got to, he’s in every freaking shot!”

Meanwhile, in the Wall Street Journal write up, the clown got one sentence all to himself. I’m going to present you the line in question as well as the surrounding paragraphs so you can see just how awesomely surreal it is in context:

“Bell is a community of about 37,000 people located about 10 miles south of Los Angeles.

Hundreds of residents showed up at the meeting, demanding four of the five council members resign and reprimanding the panel for turning Bell into what was called an epicenter of corruption.

‘If you have any dignity, you need to resign,’ resident Violeta Alvarez said during the public comment period.

A man dressed as a clown referred to the lawmakers as the ‘City Clowncil.’

Councilman Lorenzo Velez has avoided the anger directed at his colleagues because he was never drawing the high salary of nearly $100,000 a year they were, and he was one of the early supporters of reform in the city.

For the first time in the council’s tenure, a court reporter was hired to record the meeting.

The reduced taxes will apply to those due in November. If a home has an assessed value of $400,000, the owner will save $360 a year under the revised pay structure.”

Oh man, if you can think of a single news story that wouldn’t be better with the inclusion of the line “A man dressed as a clown referred to the lawmakers as the ‘City Clowncil,'” then I don’t want to read it.