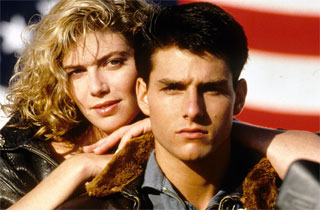 If you ever wanted to see Tom Cruise fight a robot — and we’re talking buzzy Amazon drone-type robots, not Terminators — you’re in luck: Jerry Bruckheimer confirmed recently on HuffPost Live that a sequel to Top Gun was in the works, and it would take on the harrowing, dramatic fight between Cruise’s Maverick…and drones.

Considering the way that Hollywood beats movie franchises like a pinata until they get every sweet, sweet bit of blood candy from them, it’s surprising that Top Gun hasn’t been sequelized. Bruckheimer revealed, however, that he and his team had been trying to come up with a concept for 30 years, and only recently did director Tony Scott come up a plausible, modern premise before his sudden death. It’s an awesomely ludicrous premise, though:

“The concept is, basically, are the pilots obsolete because of drones. Cruise is going to show them that they’re not obsolete. They’re here to stay,” Bruckheimer said. “It’s just getting to the starting place. Fortunately for Tom, he’s very busy, so you have to find a slot he can fit into and get a budget that Paramount feels they can make the picture.”

If Tom Cruise doesn’t play volleyball against a shirtless drone, though, we’re going to be really upset.

And just for kicks: DANGER ZOOOOOOONE.