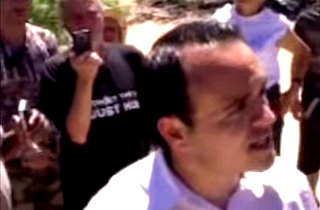 Internet radio host Pete Santilli, who’s been broadcasting from the Bundy Ranch, accosted reporter Antonio Castelan of Channel 3 News as the latter was doing a piece on the showdown. Santilli approached the reporter with a camera and began a rapid-fire interrogation: “Who do you work for? Do you feel uncomfortable with your questioning? Do you work for the American people or do you work for another entity? Do you believe the media is state-run? Do you believe your questioning was completely biased?”

But that was all Santilli needed to hear. “It’s about race? Is that what you said?” Santilli yelled as several others approached Castelan. “I’ll tell you what: he’s protecting your interests, regardless of your bias. As a Mexican-American, you should know that we’re defending your rights and you’re working for the state-run media, and you need to know that. You certainly are, especially by the bias and the line of your questioning. You are not serving the American public, you do not deserve even First Amendment constitutional rights.”

Watch the clip below, as flagged by Right Wing Watch: