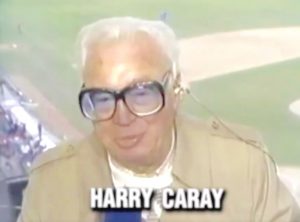 Budweiser, which has a history of pulling at the heartstrings with their Super Bowl commercials, found a way to do it again last night after the Cubs secured their first World Series victory in more than a century.

The impossible is possible. Cheers to the guy we wish had been in the booth tonight. @Cubs, #ThisBudsForYou. #FlyTheW pic.twitter.com/wLCnKCYNnO

Then this morning, Budweiser marketers said “Let’s play two” — Caray ads, that is. And the company dropped a second spot in which it spliced an old Harry Caray call over images of fans purportedly celebrating the 2016 Series clincher:

Harry, they did it. The impossible is possible. Hear the legend call one last game. @Cubs, #ThisBudsForYou. #FlyTheW #CubsWin pic.twitter.com/v0fhiFClpk

Fans on Twitter got emotional seeing the beloved Caray during this transcendent moment for their beloved Cubbies:

@Budweiser @RisqueChatter @Cubs hearing Harry Caray brought me to tears. It was a long, tight game. Hope he’s celebrating victory w us all.

@Budweiser @Cubs I just want to hug the guy! Congrats on the big win, #Cubbies

@Budweiser @Cubs if you grew up watching the Cubs in the 70s and 80s….this is chilling! #flythew

Damn. @Budweiser does it again. This will make you feel all sorts of things https://t.co/3MqjTyKHU7

@Budweiser @Cubs this made me tear up… beautiful. #Tribute #LegacyLove #Wonderful

@Budweiser @Cubs One of the coolest spots ever

@Budweiser @Cubs what a beautiful tribute to Harry…in tears…Thank You for this.

@Budweiser @Cubs Thank You for making this. Harry's voice allowed all of our Cubs fans who aren't here anymore to be here for this win. You made Chicago cry.