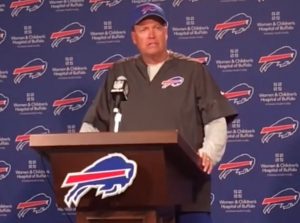 The Buffalo Bills fired coach Rex Ryan on Tuesday — after going 15-16 over two seasons steering the ship in Orchard Park.

It was something of a blow to the Twitter-verse, as Ryan has been a favorite of many in social media ever since his memorable turn in Hard Knocks, back when he was coach of the Jets.

Nevertheless, Twitter came through with a few quality jokes after the news came down. Here’s just a small sampling:

Classy move by the Bills to let Rex Ryan go while he can still get a cabinet position.

Rex Ryan has been fired after going 15-16 over two seasons in Buffalo. If someone had that record in Cleveland, they’d build him a statue.

Rex Ryan was fired. At least 2016 got one thing right. #jaymohrsports @jaymohr37

Who is up for a Rex Ryan vs. Jeff Fisher reality show where they coach rival pee wee football teams and try to finally finish over .500?

If @RamsNFL hire Rex Ryan, I swear to all things holy I’ll quit this team quicker than you can say, “7-9 bullshit.”

Bills fire Rex Ryan, wait 30-60 days and he will be some teams new exciting hire.

Which team will stupidly hire Rex Ryan as their new head coach?

Not happy with the #Rams, #Jaguars and now the #Bills. They are ruining what could have been an entertaining #BlackMonday.