Video: Phil Robertson Explains What Will ‘Do the Muslims In’… and ‘The Chinese’ 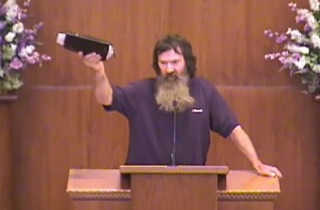 The controversy surrounding Duck Dynasty star Phil Robertson has focused mainly on his comments about homosexuality and bestiality, and to a lesser degree, his assertion that black people in the Jim Crow South were happier, but in the GQ interview that started it all, Robertson also equated Muslims with Nazis. Like his other controversial statements, this is nothing new for Robertson, who explained to an Arkansas congregation, in 2008, what would “do in the Muslims,” as well as “the Chinese,” and that Muslims are “famous for murder.”

In the middle of his speech before the Hillsboro Church of Christ in El Dorado, AR, Robertson asked “What will do the Muslims (pronounced “Moose-limbs”) in?”

Brandishing his Bible, Robertson answered “Violations of the law, that’s what’ll do ’em in.”

“What will do the Chinese in, if they don’t turn to Jesus?” Robertson asked, then answered “One violation.”

Later in the speech, Robertson talked about those who are “controlled by the evil one.”

“You say ‘Why do they murder, why do they hate us?!” Robertson bellowed, slapping the podium. “Because all of them, those four groups, 80 years of history, they all want to conquer the world, they all rejected Jesus, and they’re all famous for murder. Nazis, Shintoists, communists, and the Muhammadists.”

In case anyone thought he was referring only to some bad apples, Robertson added “Every one of them, the same way.”