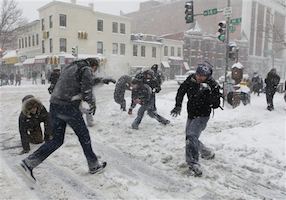 This weekend, when the story of a police officer pulling out a gun at a snowball fight in DC erupted and spread online, the Washington Post was initially dismissive, despite having an eyewitness on the scene who said that the officer did indeed pull out a gun. They didn’t get the story quite right until days later; to dispel all doubt, the officer admitted he pulled a gun. In a scathing blog post, the Washington City Paper surmised as to how the Post slipped up: a snooty attitude towards the Internet.

The City Paper‘s Erik Wemple took the Post apart for fetishizing ‘traditional reporting’ as defined by talking to officials, despite the fact that the consensus on the Internet was more than wild rumor:

the reason why the Post screwed this up is that they all have linkophobia. If you link to an outlet—such as, God forbid, the Washington City Paper—you’ve lost. You got scooped and all your colleagues are going to look down on you. Linking is a huge sign of weakness—you just can’t do it. Far better to, like, call a top police official, buy his version of events, and just place it in a post, regardless of the contradicting evidence that’s already posted elsewhere…

What is important is that in one item, Fisher articulated a longstanding WaPo policy:

1) Link to other organizations only when belittling them;

2) Be sure to contrast the inadequacy of the linkees to the great Washington Post;

3) Make sure the link to Washington Post content spans many more words than the links to lesser organizations.

For all of the talk about the demise of print and the crumbling newspaper economy, it’s a fair bet that the Washington Post can whip any blogger at reporting. Right? Maybe not always.

Here’s an ABC 7 segment on the video that sparked the controversy:


(Washington City Paper via The Awl)