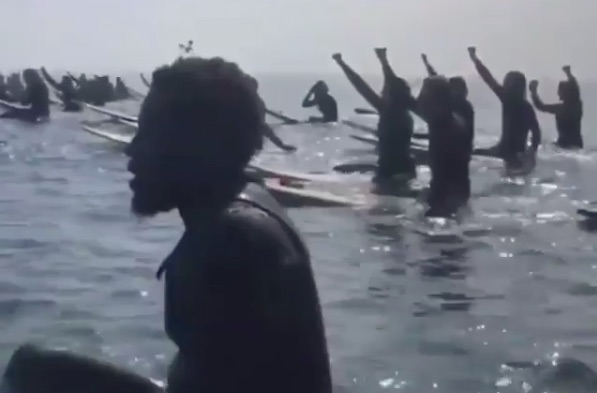 An organization of black surfers held a moving tribute to George Floyd on Saturday, with hundreds of people paddling out on the water, raising their fists in the air, and chanting his name. Floyd was killed while being arrested by four Minneapolis police officers, and his death, along with the deaths of other unarmed African-Americans by police, have inspired protests across the country that are now extending into their second week.

The event, as announced on the Instagram page for the Black Surfing Association of Rockaway Beach, New York, invited supporters to “paddle out for George Floyd.”

“RAIN OR SHINE IT’S ON!!” announced the caption, along with an emoji of a raised fist.

Saturday morning, at the scheduled time of 9:00 am EDT, hundreds of surfers gathered and paddled out on the water. As they sat on their boards floating in a giant circle, they raised a fist in the air and chanted together George Floyd’s name, along with other slogans like “Black Lives Matter,” and “Say His Name.”