Whose Questions Are The GOP Debates Answering?

Whose Questions Are The GOP Debates Answering? 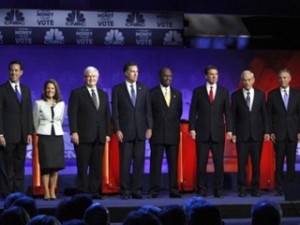 Next Wednesday is the 20th – and second-to-last Republican debate. Second to last. Weary veterans are we, glimpsing of the end of a terrible conflict.

Over the course of those debates, the candidates have been asked 839 questions; 839 opportunities to dive into how the candidates would address America’s problems. This is according to the Citizens Agenda project, a partnership between the Guardian US and NYU’s Studio 20, which cataloged each question, breaking them down by subject area to determine what the most common topics were.

The most common, expectedly, was the economy, included in 227 questions. Next, candidates’ lives and records, 223 questions, followed by the national debt and “fixing Washington,” covered 188 times. There were about twenty topics covered in total. One conclusion drawn by Citizens Agenda:

The debates have been serious. Only 12 questions (about 1%) could we fairly classify as “fluff”.

While the toplines appear to be good – a diversity of generally substantive questions – NYU professor Jay Rosen, director of Studio 20, suggests that the range of questions was insufficient. Climate change was rarely covered, for example, and only a few questions addressed topical issues like Occupy Wall Street or the Arab Spring. Rosen wonders: what would you ask the candidates?

Which fits with the mandate of the Citizens Agenda project. Its goal is to establish a mechanism for determining what voters care about, and to insist that candidates address those issues. Rosen’s question reflects the rationale behind their breakdown of the debates to-date: are candidates being asked about the issues voters care about? Again, what would you ask?

Well, what I would ask isn’t important. I’m not a Republican. The environment the debates strongly influenced their decisions. Did the debates ask the right questions? Using exit poll data begs the question.

And it brings us to the core question: are debates responding to opinion or driving it? The goal of a democracy – and the system the Citizens Agenda hopes to inculcate – is that voters are gauged by pollsters which can then drive candidates’ focus on issues which informs debate topics. Voters > pollsters > candidates > debates. Instead, it’s very possible that the system is reversed: candidates’ ads and spin drive debate conversation, which informs voters, which drives polls. Candidates > debate > voters > polls.

Ask yourself this: if voters were driving the debates, if the most important thing were to hold candidates accountable to the concerns of voters, why would the debate schedule be tapering off just as the Republican primary season has reached a point of real tension, in which the long-time front-runner faces his first real derailment threat? Part of it is that the establishment assumed the contest would be over now, and didn’t schedule debates this far out. But Romney bailed on a debate scheduled for March 1st that has now been cancelled. Are debates now less important than four months ago, when Herman Cain and Tim Pawlenty provided amusing filler?

Another conclusion from Citizens Agenda:

Who’s the most conservative of all? was a preoccupation of the journalists who moderated these debates. When it wasn’t an explicit theme, it was there in the subtext. (When handed the microphone, members of the audience never asked about that.)

If the (well-vetted and moderator-okayed) audience members aren’t interested in that question, who is? Is it what the candidates want to talk about? The party? Or is it the media?

Debates aren’t driven by meeting voter concerns. The contests are part of the amusing pageantry of a process that’s led by top-tier decision-makers. The Citizens Agenda may have illustrated that the questions asked aren’t useless, but it’s almost impossible to tell the extent to which they’re useful, the extent to which they’re addressing the core concerns of Republican voters.

Which means, quite possibly, that they aren’t.