Why Kid Rock Is ‘F*cking Embarrassed To Be A Republican’ 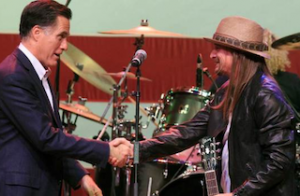 It looks like Kid Rock‘s love affair with the Republican Party could be coming to an end. In a new interview with Rolling Stone, the singer calls out Republican “dumbasses” for passing laws that prevent him from structuring concert tickets for his $20 tour the way he wants to.

Kid Rock became Mitt Romney‘s youth outreach mascot during the 2012 election when the GOP candidate started using “Born Free” as his theme song and appearing with Rock on the campaign trail. But now, because Republican-backed laws are blocking him from making several rows in the front of his concerts only available through paperless ticketing, he’s speaking out against the GOP.

“That’s one of the times I’m fucking embarrassed to be a Republican,” Rock told Rolling Stone. “It’s fucking Republican lawmakers passing those laws, you dumbasses. They already did it in New York and they’re trying to do it in Michigan. I’ve even called some of those guys to try and stop it.”

Rock also revealed that he has been taking a good amount of heat from the largely liberal rock community since he joined forces with Romney. “People in this country just hate each other for voicing an opinion, especially in my business,” he said. “I’m like the fucking lone wolf. Look, I tend to vote Republican, but I don’t like the hardcore views on either side and I’m not in bed with anybody. I’d probably be more Libertarian, but I’m a firm believer you have to pick a side. I can’t be playing the middle.”

He said he supports gay marriage and abortion, but refused to answer writer Andy Greene‘s question about who he would support in a potential Hillary Clinton vs. Rick Santorum 2016 match-up. “That’s a tough one,” he said. “Jesus. I’m not letting you snake me into that. Nice try, though.”