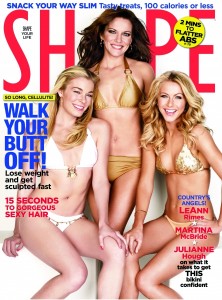 “I blocked it out in the hallway with a digital camera, especially since all three actresses have very different body types,” said Searight. “I did a mock up, and then a sketch from the mock up so that when I went to the studio, I could show the actresses where I envisioned them.” While shooting each actress separately and working design magic later isn’t out of the question, for Self’s cover Searight said that editorially she wanted the models to have “an emotional attachment.”

Shape magazine was the last women’s title to execute a triple, according to Folio, arranging country singers LeAnn Rimes, Martina McBride and Julianne Hough. Self‘s cover, hitting newsstands on September 22, will feature actresses Kristin Davis, Kristen Bell and Malin Ackerman, who also appear together in the forthcoming movie “Couple’s Retreat,” albeit with more space between them.

Self‘s logo takes up almost 50 percent of usable space on the cover, according to Seabright, so just squeezing three bodies onto the same page is half the battle. Which makes us think that a plus-sized triplet cover would be really impressive.