You Can Now Own An Original George Zimmerman Painting of ‘America’

George W. Bush isn’t the only famous person named George developing a brand new career as a painter. That’s right, the first-ever painting by George Zimmerman appeared on eBay this week and it’s really something. With the subject listed as “America,” Zimmerman’s moody depiction of the flag comes complete with the words “One Nation” literally under the word “God”: 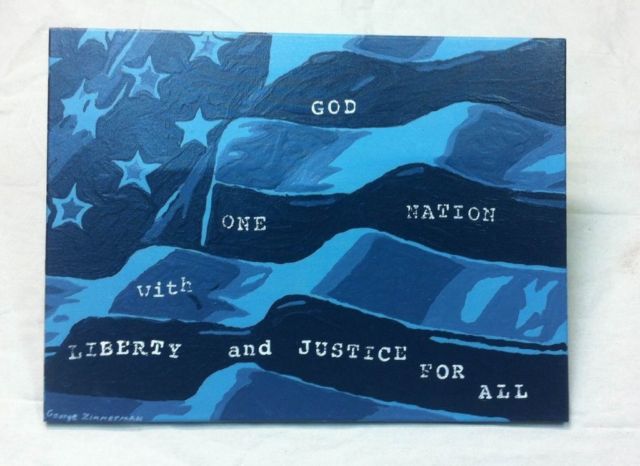 Zimmerman included his own description of the piece, for which the bidding is currently up to a whopping $99,966.00 (UPDATED as of 10pm) and rising, with all proceeds going directly to the pocket of the man who was acquitted after shooting and killing unarmed teenager Trayvon Martin. He writes:

First hand painted artwork by me, George Zimmerman. Everyone has been asking what I have been doing with myself. I found a creative, way to express myself, my emotions and the symbols that represent my experiences. My art work allows me to reflect, providing a therapeutic outlet and allows me to remain indoors :-) I hope you enjoy owning this piece as much as I enjoyed creating it. Your friend, George Zimmerman

Lest you think this is some hilariously bizarre hoax, the new painter’s brother, Robert Zimmerman, Jr. confirmed that the auction is real and that “therealgeorgez,” as the eBay username reads is actually George Zimmerman.

So, what are you waiting for? The auction ends December 21st with an estimated delivery date of December 26th, just one day too late for Christmas!